About Naropa › Leadership › Past Presidents › President Emeritus Thomas B. Coburn 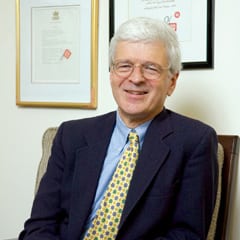 Dr. Thomas B. Coburn was president of Naropa University from July 1, 2003 to June 30, 2009. Prior to assuming this post, Dr. Coburn served from 1996 to 2002 as vice president of the university and dean of academic affairs at St. Lawrence University in Canton, New York, where he was also the Charles A. Dana Professor of Religious Studies.

During his tenure, Dr. Coburn oversaw numerous advancements during his first three years as the school’s president, emphasizing the place of students in Naropa’s mission.

“The reason we’re in business is to educate students,” he says. “Everything we do should be filtered through the lens of those who have chosen to work with us.”

For example, during those three years, Naropa University increased institutional funds dedicated to student financial aid by 60 percent. Today, 68 percent of Naropa undergraduate students benefit from financial aid, all of which is based on student need. Also, 44 percent of Naropa’s student population is Pell Grant–eligible, compared to a national average in private institutions of 28 percent.

“What this demonstrates,” says Coburn, “is that Naropa is a national leader in providing opportunity for everyone, regardless of income, to obtain a college education. This commitment to providing access actually models the egalitarian outcome of contemplative education: putting oneself in service to others.”

Further advancements during Dr. Coburn’s tenure as president include providing university housing for all first-time first-year student students through a new student residence hall; enhancing the contemplative education experience outside the classroom as well as within; introducing new levels of coherence to the BA core curriculum; establishing the Center for the Advancement of Contemplative Education; increasing the university’s resources dedicated to diversity education; revising Naropa’s mission statement; undertaking a strategic planning process; and further developing the faculty governance system.

Dr. Coburn holds a BA in religious studies from Princeton University and a MTS and PhD in comparative religion from Harvard University. He is a well-known scholar of the great goddess tradition in Hinduism. He has lectured broadly in the United States and India, and is a widely published author specializing in comparative and Asian religion.