The first time I went to a tea ceremony was about a decade ago, when I got trapped in Tokyo, but that’s another story.  The second tea ceremony I attended was on campus here at Naropa University in Boulder, Colorado.  And that’s not really strange.  You should see some of the other amazing things that take place here (#silentdiscos, #DecolonizingThanksgiving, #Acroyoga, #Fridayhikes)!

Five of us gathered under a trellis on the Arapahoe Street campus, waiting for our Sensei to arrive.  When he did, we followed his lead, washing our hands in the ceremonial bowl in the garden.  The flagstone leading up to the teahouse was damp, having been washed clean prior to our arrival.  We approached a small wooden edifice, a Japanese teahouse built in the Rikyū style and given to Naropa’s founder, Chögyam Trungpa Rinpoche in the early 1980s as a birthday gift from his students.  Upon his death in 1987, Trungpa’s family donated the teahouse back to Naropa University and it was moved to its current Arapahoe Avenue location. 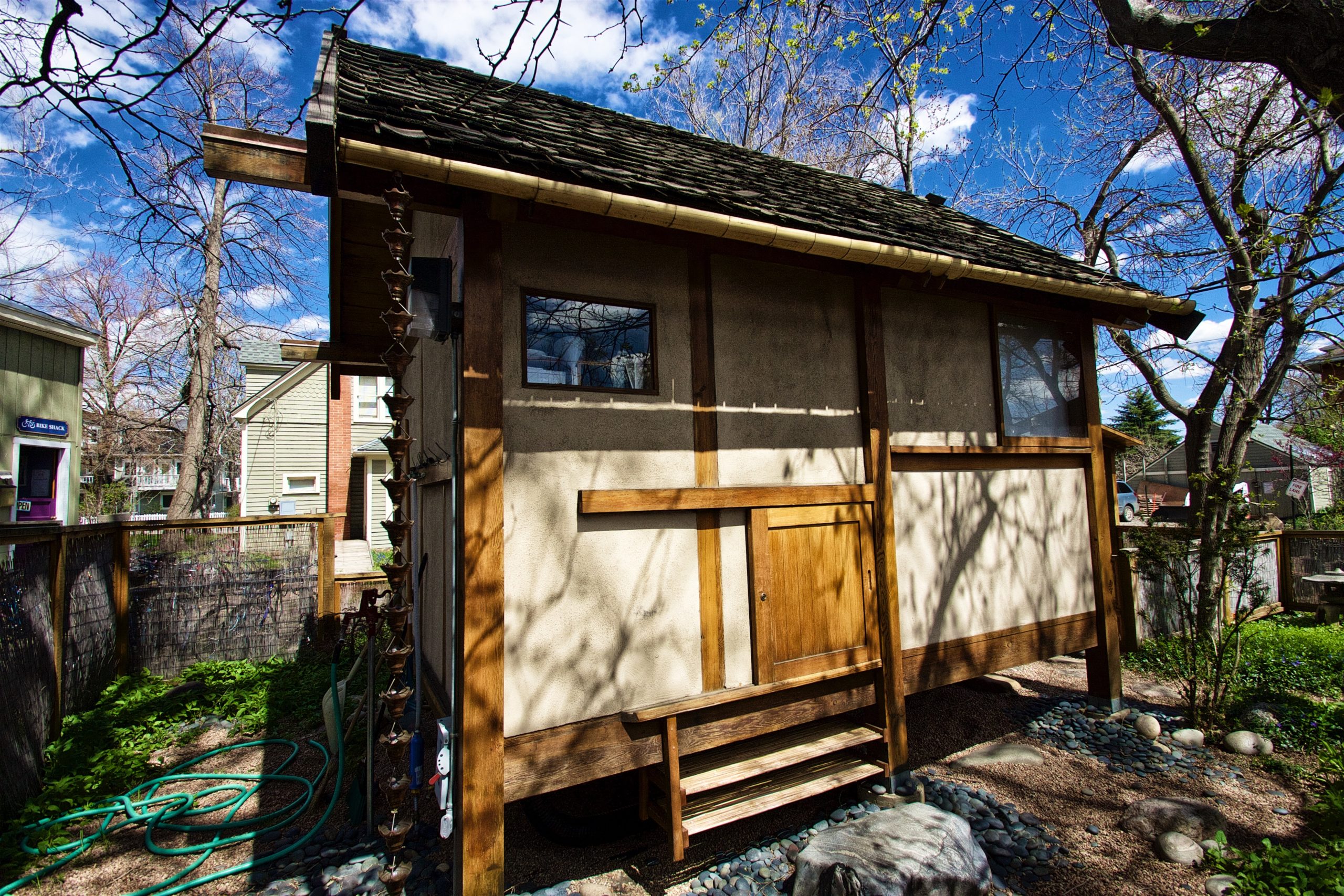 We were instructed to remove our shoes, then had to duck to enter the low half-door of the teahouse.  This is intentional in design, demanding humility from all who enter, and is relatively new in the tea ceremony world, having only been brought into the tradition in the mid-1500s by revolutionary tea master Sen no Rikyū.

When it became popular in Japan, the custom of drinking tea, first for medicinal, and then largely also for pleasurable reasons, was already widespread throughout China.  Tea ceremony was originally an exclusive rite and status symbol amongst the warrior classes.  Over the years in Japan, tea ceremony became very political and it was into this arena that Rikyū entered.  The best-known and most influential historical figure in tea, Rikyū is credited for having brought the way of tea from the exclusive domain of the privileged to the people.  He popularized the use of very tiny, rustic tea rooms referred as sō-an (“grass hermitage”), and made numerous other changes that would forever change the way of tea.

Ultimately, he was required to commit ritual suicide because of his revolutionary beliefs.  His approach to tea illustrated the fact that each meeting must be treasured, because in its ephemeral nature, it cannot be reproduced.  He set forward the principles of harmony (和 wa), respect (敬 kei), purity (清 sei), and tranquility (寂 jaku).  And to this day, it is Rikyū’s way of tea that is largely practiced both in Japan and around the world.

Upon entering the tatami-floored room, I saw a scroll featuring beautiful calligraphy hanging by an altar, accompanied by an arrangement of fresh flowers. Every aspect and nuance of the tea room and ceremony is carefully tended. From the way you fold the paper napkin, to the various forms of bowing that take place, to the side of the cup from which you sip, every single detail is aimed at maximal efficiency, aestheticism, and perfection. Water was set to boil and matcha, a powdered green tea, was placed into a bowl.  The two were then precisely whisked together, each motion intentional and prescribed.  This was then served to attendees one by one, who are each meant to bow to certain people at certain times and move across the tatami-floors just so.

I did it mostly wrong.  And that’s something, because it’s really all about practicing to make every move intentionally and with grace and precision. I could practice for another thirty years and still not have it. In fact – one woman who was there the day I attended has been at this for more than twenty years, and she’s still perfecting the motions.

I found it to be the most beautiful, precise, and peaceful contemplative practice I have yet to witness.  And bonus – I even got to enjoy a cup of tea and a treat!  If you live in Boulder and haven’t tried this yet, you must.  And if you don’t live in Boulder, it’s worth the trip.  Come on over to Naropa University to tour campus and take a look at why what we do here is like nowhere else in the world.  See Colorado’s greatest Sycamore trees, and stay for tea.

The tea house now sits, open to the public on Monday afternoons from 3-6pm (be forewarned that a ceremony can last up to three hours, but you’re welcome to simply drop in and stay as long as you can).

And now I think I’ll go make myself a cup of tea.

Info: Japanese Tea Ceremony is open to everyone – Just drop in for a cup of tea. Students may train in the ‘Art of Tea’ as a contemplative practice.