Two U.S. Air Force Academy (USAFA) cadets have attended the Rocky Mountain Psychological Association’s (RMPA) annual convention for three years in a row, presenting on what they have studied and learned from interactions with Naropa University. Why they are presenting started when I was introduced, by Naropa psychology professor Peter Grossenbacher, to Michelle Butler a behavioral sciences professor at the academy. The introduction was after the inaugural Veterans Day event I hosted at Naropa in 2015.

The idea of working with USAFA reminded me I first heard about yoga from a high school friend in 2001, and then looked into it more the following year while at the former Armed Forces School of Music (the army now has its own element). I am deeply grateful for the initial and other introductions into yoga, and the thought of being able to introduce cadets to a contemplative practice makes my heart sing.

Since 2015, a few of us Naropa folks have made visits to the academy. Two of the visits were with a former student veteran in 2016, and two visits were in 2019, with a couple of graduate students and a few faculty members. The cadets (see hyperlink for the cadet’s viewpoint) have been making steady visits to Naropa for each semester’s practice day, as well as other visits for discussions.

We were also fortunate to be featured on the front cover of The Denver Post regarding the developing collaboration. The article in The Denver Post allowed the project to get more visibility than what I could do, which is great. I have heard that key members of USAFA are interested, and it has sparked more curiosity from the Naropa side. 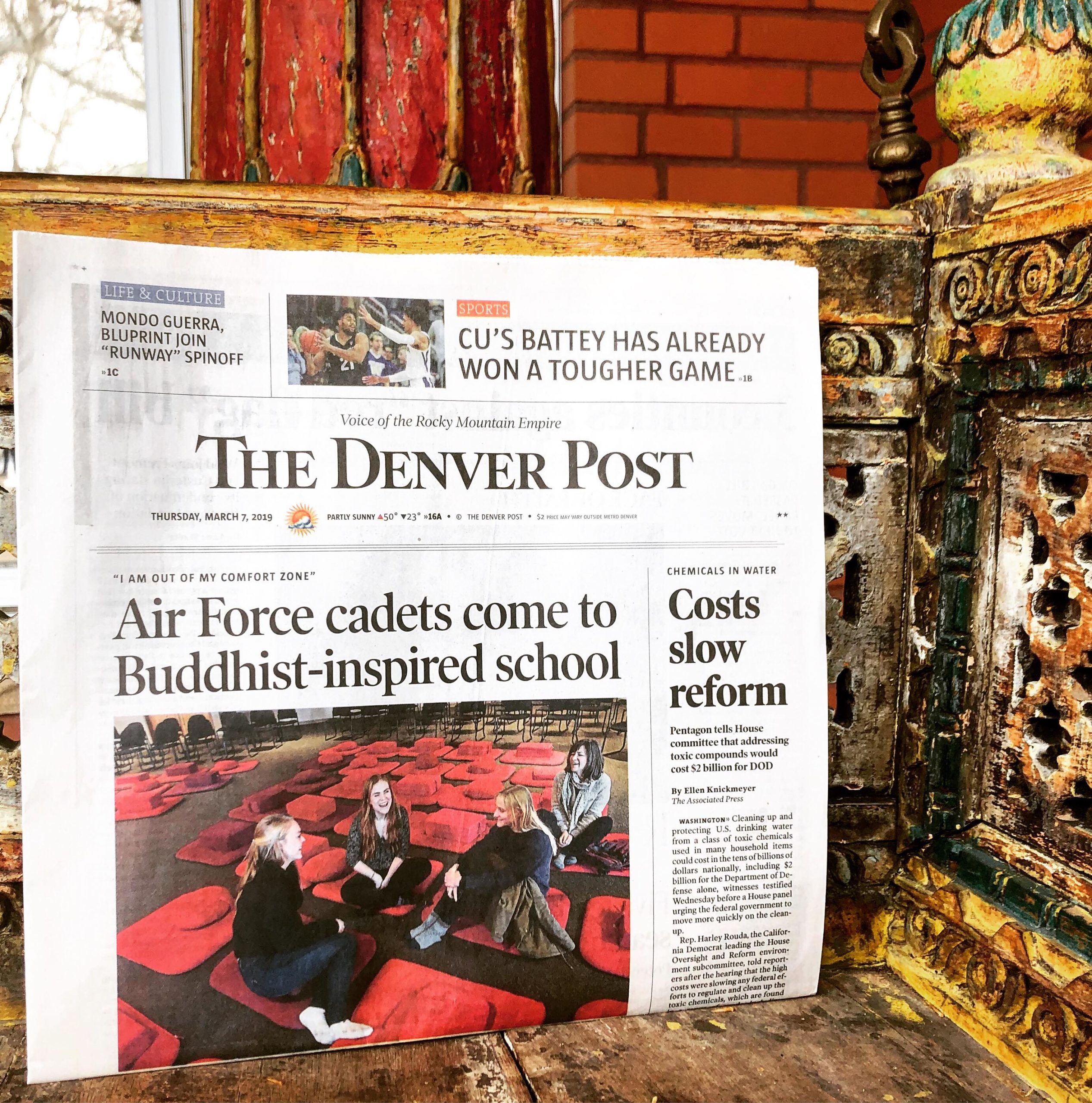 With this sparked interest, I am hoping there are a few interested Naropa students willing to do an independent study to work with the cadets on the project. Thus far, the model has been three years of USAFA cadets using the collaboration as their Senior Capstone Project. One question has continually been surfacing about what this project is. The thing is, we don’t know what it is, because it’s very nature is based on creating what it can look like. Our initial topic has been to dialogue with difference. A nice topic, indeed, though there are numerous ways the collaboration can grow and evolve.

Topics that could be discussed, from previous conversations, in a compare and contrast model of both institutions are:

One presentation poster at the RMPA conference I found intriguing was a poster about translating experience and language from military life to the civilian workforce. The poster mentioned topics of self-confidence and translating one’s military experience as the main challenges for transitioning veterans. As a veteran and the current Naropa AmeriCorps VISTA Veteran Success Coordinator, these topics are significant.

Similar to Naropa’s language being different than the language used outside of Naropa, military language is also a challenge to translate to the civilian population. When I was in the army, I found their claim about the army ‘training leaders’ to be a true statement (that can also apply to all branches of the military). Though, they didn’t assist us in how to articulate that leadership training when the time came to depart the military.

That said, on Monday, April 29th, I was happy to hear that steps are being made to address this challenge. I don’t know how thorough it is, but I heard from an army music (and bicycling) buddy, that the army’s transition course now includes assistance on translating military experience to civilian terminology. Hopefully, it’s an in-depth course. Inspired from the poster, I also spoke with Naropa’s Office of Career & Life Development about having a conversation to help address the issue.

A definite challenge of transitioning is that some who exit the military have important positions with large responsibilities and title. When one departs the military, we are just another member of the sea of people who don’t know or care about the work we have done, unless we’ve managed to form our status in the usual way like with media and etcetera.

Of the many inspirations from the RMPA conference, one main one was that I had a thought spark to pursue a PhD, and maybe even teach at USAFA (crazy idea, right!?). One of the sessions had a panel of PhD candidates sharing their journey to their program and answering questions those of us in the audience had. I was particularly impacted by a non-traditional student who was both in the military and was a sheriff. He wanted to help people more than enforce law, so he decided to pursue psychology.

Thus far, I have made three attempts to pursue a higher degree. I attempted to apply to the Naropa’s Somatic Psychology: Dance Movement Therapy program, but never submitted the application. I applied to Naropa’s MFA Theatre: Contemporary Performance program, and was accepted but couldn’t financially afford to go. This year, I applied for and was accepted into Sierra Nevada College’s Interdisciplinary Arts program.

I will now be moving to the area near Sierra Nevada College (the Tahoe Basin and my hometown area) to pursue a higher degree. What that looks like, I’m not sure. I know that it will give me the opportunity to go deeper into my practices, and that is what is most important to me right now.

I am grateful to have been given the opportunity to experience RMPA through this developing collaboration called the UNITE Project (or USAFA-Naropa Inclusion Team). It is in its infancy, and what it is will depend upon who decides to participate and what they (USAFA-Naropa) come up with in collaboration. I hope to see more development happen with more Naropa student involvement this year and after I depart AmeriCorps/Naropa/Colorado at the end of this calendar year.