I wrote a script and spent most of last summer and fall editing and developing it. There were to be three cast members, myself included. It was my hope to work with the first year cohort (or alumni of the program) to utilize our training to then rehearse and perform the piece, practically applying what we were learning in the classroom. Due to an unforeseen scheduling conflict, however, I found out the day of auditions that none of the first years could be in my piece. Jade Garisch, my director, and I searched for alumni before the end of last semester, but to no avail. We had several wonderful folx audition but were unable to find people who could commit to the rehearsal schedule we laid out.

I had to let go of all the expectations and hopes I had for the project at that point, which was not easy. Instead of pushing myself past the grief, I allowed myself time to process the loss of the project I was hoping to produce, and focus on whatever was going to happen next. Thankfully, winter break provided enough space and time for me to contemplate and decide to turn the first play I had ever written into a one-person show adaptation.

Trying to adapt The Red Shoes script that I wrote turned out to be more difficult than I had anticipated. It was a 52-page script that relied heavily on the triad of actors to convey the story, including much of my personal experience with some difficult material. That version of the script allowed me to speak about my experiences with mental illness, self-injury, sexual assault, and the gendered upbringing I was given growing up as a female-identified youngster and teenager. I was able to place the ghost of my mother in the world of the play and interact with her. Those explorations had to occur outside of myself. Jade and I sat in the rehearsal space the last two weeks of January trying to find a single thread in the dense tapestry that I had woven, but in the end, we decided to pull what we could from the script and see how it could piece together.

After that decision, we went back to the original Hans Christian Andersen fairy tale to label the major events that happened in the story. I then went back through all of the writing I had available that I had written over the years, including old poetry, to see what text already existed that might fall under each action. We narrowed it down to eleven moments, which resulted in an 18-page script that we could work and build off of. This version included some of the text from the play, Hans Christian Andersen’s autobiography, an original song, a few of my old poems, and several images and phrases that came up in free writing exercises that I was doing at the time. We had an invited rehearsal to see how the script was being received, and the feedback was that we were over explaining the action as it was happening. I had to do what, to me, felt completely terrifying—I dropped all of the text from the piece. 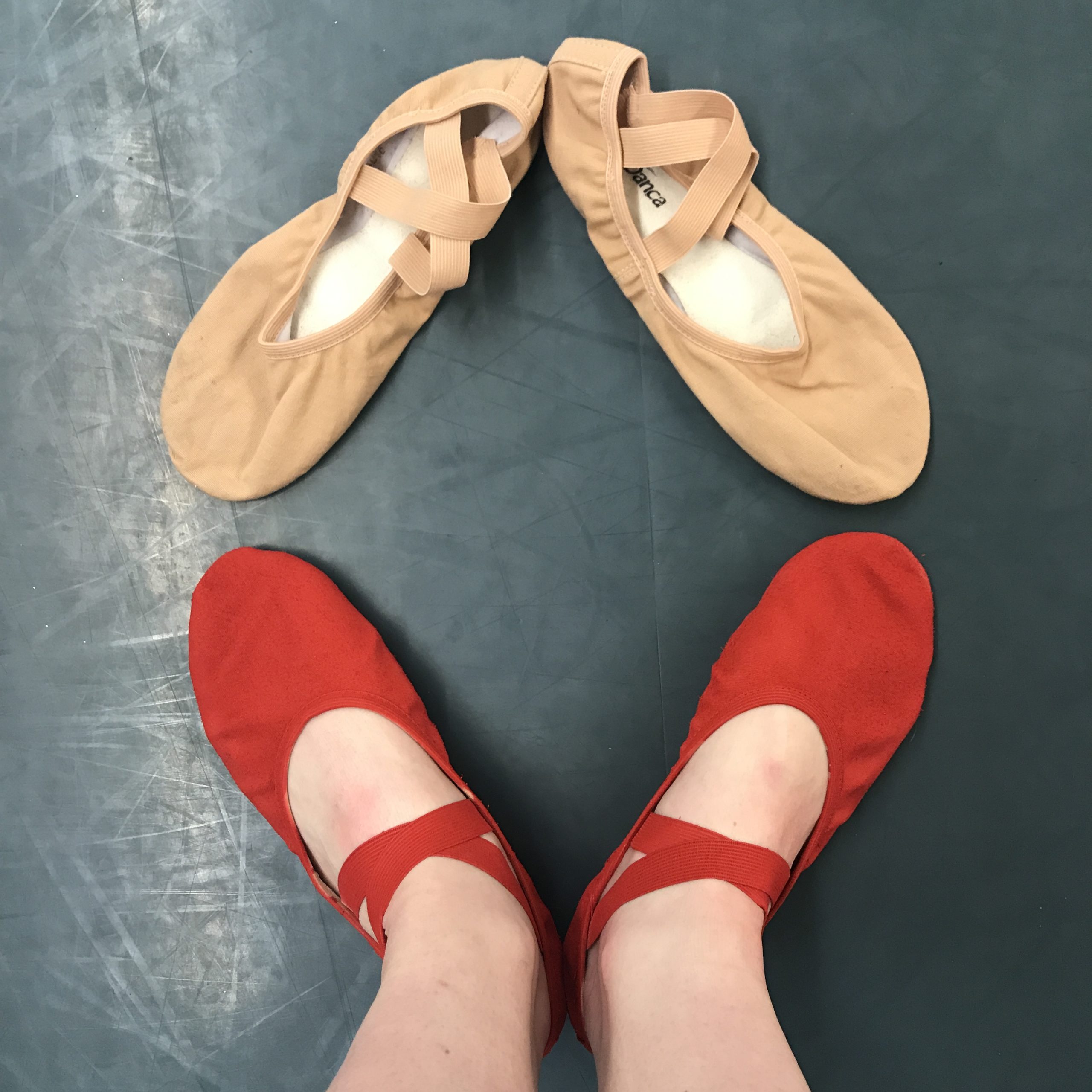 It was in that moment I realized the story I had been trying to tell as a narrator was, in fact, a movement piece. Several times during this process I found myself shaking my fists at the heavens saying, “Why did I have to pick the piece with dance in it!” I don’t consider myself a dancer, or even someone who moves well, so to face the music and realize that the piece needed to be told through movement really forced me to leap out of my comfort zone and try something new.

In all of my training at Naropa, the most difficult aspect for me has been our somatic bodywork. As a performer, before this program, I felt that my performances were always in spite of my body. And when we were actively encouraged in class to move and self-evaluate and explore our own relationships with our bodies, well, some pretty heavy stuff came up.

What originally drew me to retelling The Red Shoes was how much of my own story I saw in Karen’s suffering and ultimate demise. I couldn’t accept how her self-expression was considered vain, and how many times she asked for help only to be scoffed and treated as “other.” I wanted to tell her story, my story, but with a happy ending that didn’t result in Karen conforming to the system that cut off her feet. So, instead of abandoning the project yet again (it was quite tempting to go back into my safe little cocoon of ‘but I’m not a dancer’), I decided to forge on and do what I could. I choreographed movement for the first time ever—movement that was authentic to my experience of grief, anxiety, and helplessness. Most of the content from the script I wrote ended up in this version, just in movement. We ended up bringing back some of the text, and it all finally started clicking.

Theatre is sacred to me. I don’t consider myself religious, but if I did, my place of worship would be the rehearsal room and performance space. I decided to take this opportunity to make my thesis space sacred. With the guidance of Leslie Grasa, who works at Naropa in the Development Department and is an alum of the MFA Theatre: Contemporary Performance Program that I’m currently in, Jade and I began each rehearsal by meditating for fifteen minutes and constructing an altar. The altar has several items of importance to me: an angel my mom gave me (though it has since lost its wings), a stop watch to address the importance of time and mortality, pictures of my mother and I, a Ganesha statue to help remove obstacles to the process (or place obstacles exactly where they need to be in order to set me on the right path), pins that I found among my mother’s things after she passed, my great-grandmother’s pearl earrings and ring, and a heart potpourri sachet that my great-grandmother crocheted and my grandmother filled with dried rose petals from her garden in Michigan.

I invited these energies each rehearsal to be present with us to help tell my story as authentically and honestly as possible, to thank them for what they’ve given me, and to hopefully be able to carry them through this process—not as baggage—but as an encyclopedia of experience to draw from. I am grateful to have had the time and space to approach the work in this way. And how often is it that a performer gets to tell a story once, then go back and really dive deep into the material to create something entirely new? Self-doubt has been debilitating throughout this process for me. It had me shaking in my boots, especially about dancing in front of people from a place of such vulnerability. However, after the pieces finally fell into place, there was a release in my chest—a void that was eventually replaced with hope and confidence in the work and material. It was such a welcome relief!

I know I have learned a lot in my brief time here at Naropa, but if you asked me what exactly it was, I’d be hard-pressed to name it. But in doing this work—in crafting this process and really surrendering to the story and my training, I was able to integrate the material and do something I’d never dared before. It hasn’t been easy. But it has been worth the effort and I am so incredibly proud of myself, my team and this completely unique piece of work.

Thank you for reading and I hope to see you at the world premiere of The Red Shoes by Kristin Marie Stelter, March 2nd at 7:30pm, March 3rd at 2:30pm & 7:30pm, and March 4th at 2:30pm! All performances are free and open to the public, and take place on Naropa’s main campus at the Performing Arts Center. ')}